The UN Convention on Biological Diversity at its meeting in Nagoya in 2010 identified as its first strategic goal the need to mainstream biodiversity understanding by 2020. Achieving this will require a revolution in how the issues are shared across wider society. Indeed I would argue they will have to become a much more emphatic part of our cultural appreciation as well as our scientific understanding of the world around us. This was one of the reasons why,  a few weeks ago, I was delighted to join the briefing of 2nd year students at the London College of Communication as they set about preparing projects for Green Week.

I was particularly interested because actually young adults are not, according to the  research literature, necessarily strong candidates for engagement with more altruistic issues such as care for the environment. While people moving into parenthood with young children and older people leaving work and reflecting on their lives (and grandchildren) are more disposed to think about the world around them, students are notably more narrowly focused on themselves their performance and careers. Course leader Sarah Temple had already demonstrated that these students were typical in this respect. She had explored their ‘value frames’ using the Common Cause methodology and the student’s assessments of themselves had confirmed their typical interest in themselves rather than the wider questions of society and environment.

It is of course true that major social-political movements have mobilized student support so that they have played critical roles in their emergence. Take for example the major race segregation and anti war protests of the sixties america and the anti racism and anti nuclear movements in 1970’s UK. Environmentalist Jonathan Porritt has commented on how, in contrast to those decades, student protests against the issues of social inequity and environmental degradation are very constrained today. However there are more ways to respond than direct protest movements. A core reason for Temple pursuing the project is because many of her students will take up careers in the media, design and advertising industry. She is keen to ensure as part of their college experience that they get a strong sense of social awareness and responsibility,  especially as they will in  be in positions to influence society through their future professional roles. 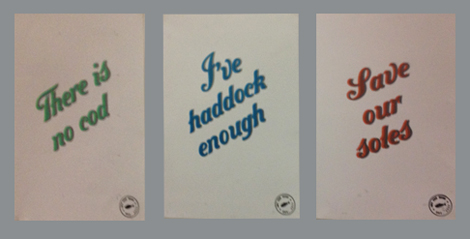 On Mar 6th I went along to the college’s Green Week exhibition of ideas and responses;  a diverse range of explorations on issues as wide as encouraging the planting of wild meadow flowers to making more effective use of unwanted materials rather than seeing them go to waste. The students had taken the ideas to heart and bought great creativity into play. One project I particularly liked was Off The Hook  a campaign concept  to help protect fish stocks by encouraging interest in less known species which could be harvested sustainably. What was interesting about this concept for a local college campaign was its simple juxtaposition of recipes for cooking unfamiliar alternatives to fish under threat with the use of humour. The combination had the reassuring effects of normalising the issues directly into the realm of everyday discussion and experience.

My favorite however had to Hidden – a proposed campaign to counter the massive waste of agricultural produce by major supermarket companies, whose selection processes take only the most visually perfect produce for retail can lead to massive wastage in the food industry. The consequences of this are not only totally unacceptable for people, but it also has very poor consequences for biodiversity as it adds significant and unnecessary pressures for agricultural land expansion at the expense of nature. The beauty of their proposal was the direct positioning of their hoardings for maximum impact. Their idea was to use arable fields along the roadside to host the campaign, the juxtaposition  graphically visualising just how much of these field contents would fail to reach the supermarket shelf.

The LCC students have demonstrated what could be achieved across higher education if, as young people prepare for their chosen careers, they are also specifically encouraged to consider how, through their chosen occupations they might contribute to the wider responsibilities for society and environment.